Cayo Las Brujas is a tiny island of about 7 km2 (2.7 sq. mi) located off the northern coast of the Cuban province of Villa Clara. With its two neighbors, Cayo Ensenachos and Cayo Santa Maria, they together form a beautiful and quiet resort destination with amazing beaches, called "Los Cayos de Villa Clara". The names "Cayo Las Brujas" and "Cayo Ensenachos" are however less known because this popular destination is often simply called by the name of its main island, Cayo Santa Maria. While browsing through this website, you will notice that several of the links in the top menu redirect you to our website about Cayo Santa Maria; this is in ordrer to avoid repeating the information that is common to the three cayos.

In the Hôtels section of this website you will find information on the hotels (present and future) that are specifically located on Cayo las Brujas, for information on the other hotels of the archipelago, visit our websites on Cayo Santa Maria and Cayo Ensenachos.

These cays are connected to the main island of Cuba by a 48-km (30-mi) causeway (called pedraplen in Spanish), from the coastal town of Caibarien. The construction of the Pedraplen began in 1989 and was completed in 1999, paving the way for the development of mass tourism in these cayos.

The "Cayos de Villa Clara" are part of a much larger archipelago called Jardines del Rey (King's Gardens) which is currently one of the most active area in Cuba for tourism development. This archipelago should reach a capacity of about 32,000 rooms distributed in the following islands: (from west to east): Cayo Las Brujas, Cayo Ensenachos, Cayo Santa Maria, Cayo Guillermo, Cayo Coco, Cayo Paredon Grande and Cayo Cruz. Click the King's Gardens Ilsands link (from the About top-menu) to learn more about the other islands of this archipelago 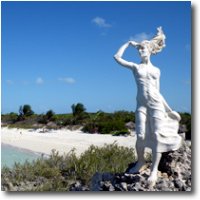 On Cayo Las Brujas, there’s also a local airport for domestic flights; unfortunately the runway is too short for large aircrafts.Besides the hotels and gorgeous beaches, you can also find in Cayo Las Brujas a marina (Marina Gaviota), a diving center, a gas station and a snack bar. Since March 2018, there is a new hotel and small comercial center named Plaza Las Salinas in Cayo Las Brujas

Are your wondering why the island is called "Las Brujas", which means "The Witches"? There is a very peculiar story behind this name, click to discover the legend of "Las Brujas".

With the nearest international airport being located in Santa Clara (the capital of the Villa Clara province), it takes about 80 minutes by bus to reach Cayo Las Brujas from the Abel Santamaria Airport; the first 60 minutes or so are through the Cuban countryside and the towns of Camajuani, Remedios, and Caibarien; and the last 20 minutes on the causeway (el pedraplen) over the sea. The Cuban government has recently built a new road to bypass the village of Remedios. There would also be a project to maybe build a motorway to reach the pedraplen in about 30 minutes, which would allow reaching the cays in about one hour. Note however that the current ride is not monotonous, on the contrary; it gives you the opportunity to visit a bit the region and admire the scenery. Besides, a local guide accompanies each bus carrying tourists to the cayos, he/she describes what we see along the way and talks about the region, the local industries, and about Cuba in general.

Our cayolasbrujas.info website has been online since 2009 and our cayosantamaria.info website since 2002. They contain thousands of photos and hundreds of web pages about the “Cayos de Villa Clara”. Our websites are updated regularly, and we humbly believe they are the most complete and detailed source of information about these Cuban destinations. Having no business relationship (or otherwise) with any hotel chain or the Cuban government, our websites are created simply and solely for the purpose of keeping you informed about this beautiful Caribbean island that we had the chance to visit dozens of times.